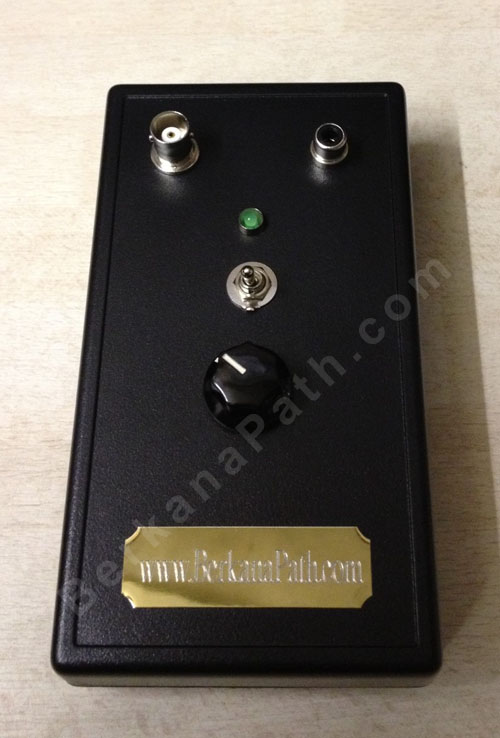 This electrode style Rife device know in Rife circles as a PAD system was developed as a commission. It is essentially a modification of a highly effective electronic circuit designed to “Zap” warts, known as the Wart Zapper, and created by Thomas Scarborough which can be found at this link: Wart Zapper

The modification allows for the injection of certain Rife frequencies at the power stage. On a decent oscilloscope the frequency harmonics can be readily observed. Wearing the electrodes the tingling sensation is clearly felt even at the lowest power setting. The power can be adjusted by turning the small Bakelite dial. The setup is full clockwise the the maximum power position which gives a peak voltage of 24-25V depending on the battery voltage levels.

I wont make any health claims here or I’ll end up with a bunch of heavies in suits coming round to my lab and stomping on my toys!

I originally wanted to work with Ken Uzzell’s Frex amp, but found the power using the signal generator was simply too low. His amp works well for the Frex software running through a sound card as you would expect, but it’s simply not good enough for a low power, low voltage signal generator. I managed to amp the power from the signal gen with a power IC, but the breakdown frequency was about 200KHz. What I really need is a full spectrum power amp, if anyone knows where I can source one I’d appreciate an email. 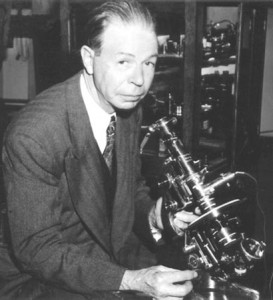 Royal Rife cured cancer. Yes you read that correctly, Royal Raymond Rife cured, among many other diseases, cancer. You may be asking, “if this is true, then why have I not heard of it? Why are doctors not using Rife’ technology?” The simple truth is Doctors had heard of Royal Rife’s work in the 1930’s, they even billed his breakthrough as “the end to all disease”. Clinical trials were carried out on sixteen terminally Ill cancer patients. The team conducting the research was made up of respected doctors and pathologists, whose aim was to assess the patients over 90 days of treatment.

To everyone’s amazement fourteen of the sixteen patients were found to have been completely cured of a seemingly incurable disease. The remaining two patients were cured after a further month of treatment.

Royal Rife through his work as a highly skilled engineer had developed a device which was able to oscillate bacteria, fungus, and disease cells at their resonant frequency. The result being that the cell membranes ruptured destroying the diseased cells. This machine was to later be dubbed, the Rife machine.

A large number of medical professionals who originally supported Rife’s work, begun to deny all links with him after a few years. A few met a sticky end, labs were destroyed by arson, and research papers were spirited away. Dr Rife himself was killed by an “accidental” overdose of valium in 1971.

It is clear from these past accounts that a monster was at play. This monster took the guise of the American Medical Association. After a failed attempt to buy Rife’s technology, the carnage mentioned previously mysteriously unfolded. You need to understand that far from having your health as their vested interest, organizations such as the AMA are more concerned with keeping you sick so that they can sell you more drugs, the sale of which lines their pockets. I must mention with clarity that the lie is different at every level,. Your doctor will believe what they have been taught, and will have your best interests at heart. The lie, goes far deeper, down the corporate rabbit hole. It’s just business as they would say.

While a Rife machine is a miraculous instrument, through my technical understanding, I can see how a negative action could be created from engineering the machine to work in a different manner. If the Rife machine can destroy all manner of disease cells, parasites, viruses, in essence, organisms. It can kill any organism, even healthy ones if the operator wanted it to.

You may believe that this is why the medical profession has essentially denied all knowledge of it, because it is dangerous? Not exactly.

To cure cancer currently a patients best hope is to undergo radiation therapy, while yes, radiation therapy will destroy the cancer cells, it is not very discriminate. It will continue to destroy the beneficial cells in your body, including the lymphocytes (white blood cells) the very thing your body uses to fight infection.

Still after nearly 80 years, the technology that Rife developed remains lost to the vast majority of the world. It is only just starting to be rediscovered by a few daring alternative therapy practitioners, mainly in Europe where the law allows much more freedom in comparison to America. Hopefully, in time, when people become much more accepting and learnt to think outside the square thing, an end to all disease can once again become a reality. Until this golden time is upon us the Medical Mafia keeps pushing us drugs and Royal Rife’s work is but a memory. It is up to us to create a positive future, let’s start now.

I have selected a few videos for you related to Dr Rifes work. The first video shows the effect of Rife frequencies on bacteria. The second is an audio interview with Royal Rife recorded in the 50’s. I hope you enjoy.