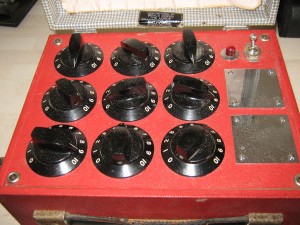 I have been fortunate to acquire three original Bruce Copen Radionic Instruments. Unfortunately, they were in quite a state when I received them. The images below are of a nine dial base 10 resistance instrument. I can’t seem to find any information on this, but judging by the pass dates on the old Colvern potentiometers, it is from the early to mid 50s. Looking at the general grime build up and rust on the nickel fittings, I can only assume it had been stored in damp conditions for a number of years, most likely in a shed or barn. It is sad to think that these impressionable instruments were left neglected, their original owner no longer able to care for them. At one point, they were used extensively to manufacture homeopathic remedies. A lot of the surviving vials came with the lot. However, I have no use for vintage remedies so have stored them away. If anyone is interested in the vials, please get in touch.

I am slowly, working my way through the restoration, and am making good progress. I have decided to tackle this nine dial instrument first, as it is the easiest. Currently, I have fully cleaned up the casing, and replaced the fixings with brand new nickel latches and hinges from the original company. I have also replaced the leather strap handle on the front. The inside lid has been lined with red card, reflecting the original intentions of using paper, which was too damp and dirty to re-use. I will upload some new photos on another post over the next few weeks. Currently, I’m working on the control panel. Sadly only one of the original potentiometers is in full working order, luckily it is the one which can’t be easily replaced. Copen’s wiring is the most unusual. On this nine dial instrument, you have three logarithmic carbon track 1Megaohm pots, then one 50k linear carbon track. The remaining five in the sequence are Colvern wirewound’s which go from 100k, 10k, 1k, 100R, and 10R I can see the logic in the last five as the resistance steps down, but it’s almost as if Copen has rummaged in his parts box to make up the first four in the stage. This initial 3-4M of resistance is seen in the other instruments I have. It would make more sense if they stepped down like the others and were all linear. It’s a mystery!

The neon lamp on this instrument is wired in an unusual manner, so that it is turned off when the power is in the off position. I suspect the original owner fiddled with the wiring at some point in its history. I intend to rewire the circuit with the same type of wire Copen used, and replace the shot pots, but leave the unusual configuration intact, aside from the neon lamp which I will change to reflect the correct way of operation as seen in the other instruments I have. I look forward to presenting the fully restored instrument to you in a new article. 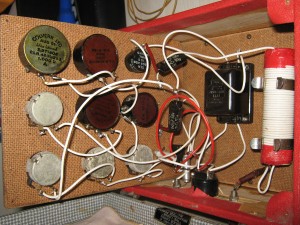 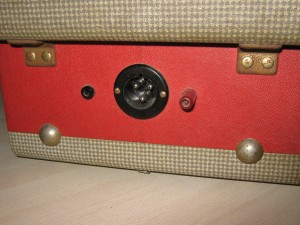 Some of the potentiometers aren’t as damaged as I originally thought. A great deal of tuner cleaner, and they appear to work o.k. Its not to my usual high standards, but what can you expect from components that are sixty odd years old?! The resistances are all o.k and within the manufacturer’s tolerance range, it’s just the movement  is not as fluid or consistent as I would have liked, and this may present a problem when tuning the instrument. I have several wirewounds en route, so it should not be a problem. I would like to keep the originals where I can.

Furthermore, the card lining the lid has begun to peel away. I may just go and Araldite a sheet of thin felted, or vinyled wood to the lid to get around this problem. In any case, I will stick with the red as it compliments the red leather of the case. 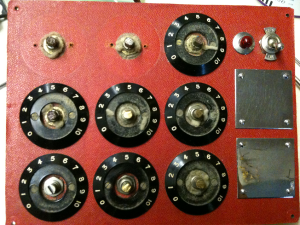 The clogged up dials on the control panel are clearly visible in this image. It has since been completely taken apart and cleaned. The dials look as good as new now.