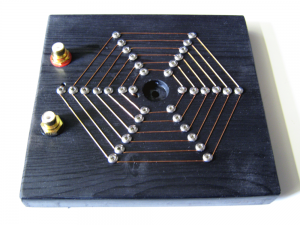 My bio-shield was inspired by a sacred geometry protection seal which was designed by the Sevranx brothers. I first came across this design on Chris Gozdzik’s site “divining mind”

I feel that although the symbolic design would work, it needed to be enhanced to make it even more powerful. It has only become possible quite recently to do what I wanted with the shield, with a little help from Joseph Max of Aetheric Arts, I was able to emulate the loop antennas of early radio. This shield also became a proof of concept, which allowed me to try out the winding method so that it could be used in a field radionics device which is in the pipeline.

The design and construction of the shield employs early stealth technology in a proprietary manner, the component of which I have had sitting on a shelf for years and only decided to use fairly recently. The aim is to match the bio-electrical signature of the witness and pass an equal opposing signal around it, this would have a scalar effect cancelling out the biological signal rendering the target invisible to all that would wish them harm.

The tech for such shielding exists on warships, but is employed only to make the ship magnetically inert.