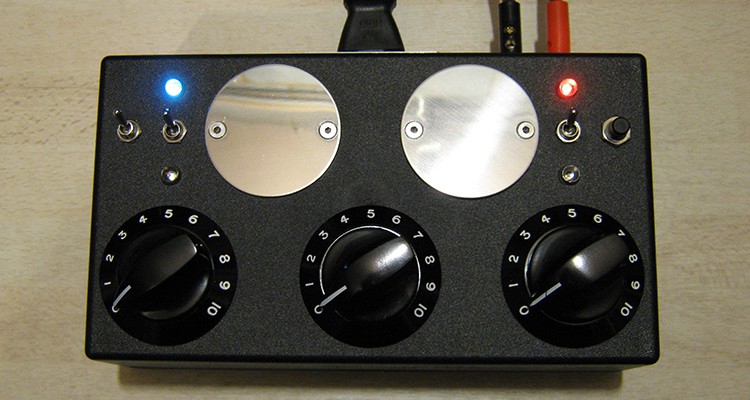 I have decided to commercially launch Berkana Labs. This is to provide individuals with the opportunity to purchase high quality radionic and aethertronic instruments.

To kick off this commercial venture I have developed the Wickenden Device V.02. The plan was to develop an entry model which packs a punch. I have based the aesthetic design off of the classic wickenden device, but the core of the instrument has had a complete overhaul. The amplifier has been re-imagined, and re-engineered to provide even more power. I wanted to be able to include a few other functions so after a fair amount of research and development I was able to include the following functions: 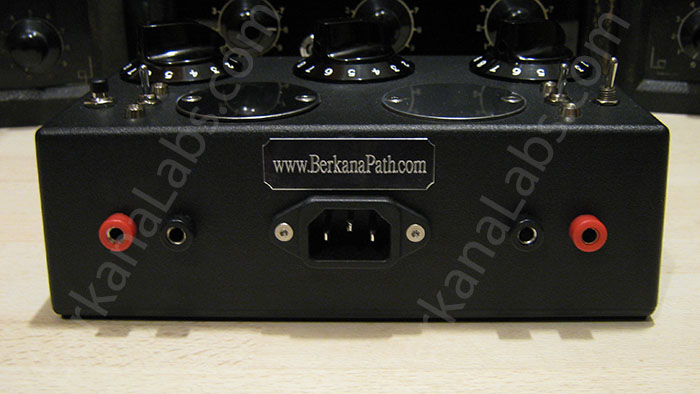 Output and Input sockets on the back of the instrument.

Stochastic resonance is a process which allows weak signals to be boosted by adding a wide spectrum noise into the circuit. I have elected to include it in this system based on my years of paranormal research and experimentation which has yielded positive results with stochastic resonance in detecting lesser known underlying or trans-dimensional signals.

The automated remedy maker processes the signal from the input plate and sends an out of phase or mirror signal to the output. The processed remedy is then administered to cancel the effect of the sample on the input. For example, the operator would place a diseased sample on the input plate, and the mirror of the disease in remedy mode would be sent to the output. A vial of water on the output plate for instance could then be programmed with the remedy signal, which would then in turn be administered. Once administered the remedy would then get to work to cancel out the disease.

The vibro potentiser is an experimental function and is based on the idea of homeopathic succussion, but in a more subtle form. The French Homeopath Jacques Benveniste determined that in order for his sample to be effectively programmed the water molecules needed to be vibrated. The V.02 does this quite effectively on a molecular level.

The modified clearing system uses a levelling signal transmitted across the entire circuit, while simultaneously operating the classic UV clearing system as developed by Joseph Max.

I have opted to use a universal power supply inbuilt into the circuit. This can accept a wide range of Mains power voltages, 80-260V AC and either 50/60Hz. The socket is a standard IEC or kettle lead, the same type used in most PC power supplies. The leads for which can be purchased from your local PC or electronic store. I would love to be able to ship these with the correct cable, but unfortunately I can only supply UK 3-pins. It will be up to you to supply your own for your home country.

These are just a few of the features. In addition we have, twin quartz inductors for aetheric programming, modulation, and transmission. Hard wearing polished stainless steel input and output plates as used on classic instruments, counter sunk fixing bolts to allow for easier positioning of large bottles and specimens. An improved non slip surface on the base, and hard wearing base 10 phenolic tuning dials. 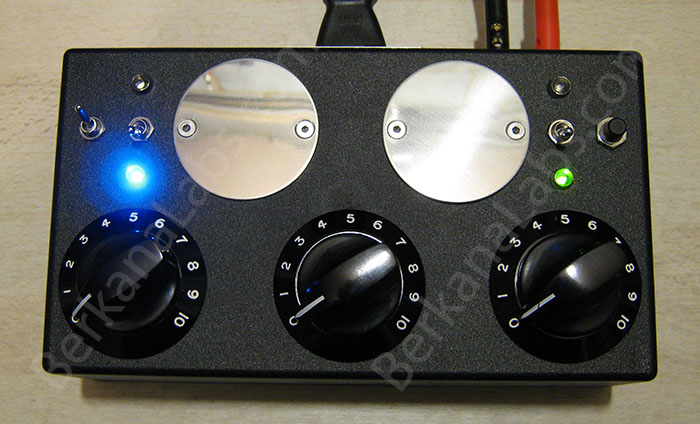 The V.02 has also been developed with Rife technologies in mind. This instrument allows the operator to input a variety of signals and have them processed and modulated by the instrument which can then transmit them to a number of output devices such as a traditional Rife Plasma device, or one of my own construction seen in the videos. The plasma globe also works well on its own as an output device to transmit the pure radionic signal. There’s nothing quite like a bit of Tesla tech to transmit your intentions into the aether!

These Wickenden Device V.02 radionic instruments will retail at £350 GBP + International shipping (free UK postage) I’m still working on finding a good courier that can deliver the instruments globally at a reasonable price.

At present I am developing some printed circuit boards for the units, once they are complete I will be able to finish off the first batch of instruments. It looks like they will be ready early 2014.

I am also working on some videos of this radionic instrument in operation, and will add them here when they are complete.

If you are interested in purchasing a Wickenden Device V.02, please contact me using the form below.

I have finally designed and developed some circuit board to take the core of the Wickenden Device V.02. Below is an image of the test board I put together. This acts as the sort of motherboard for the Wickenden Device which performs all the functions the instrument is capable of. One of these boards is inside each device. 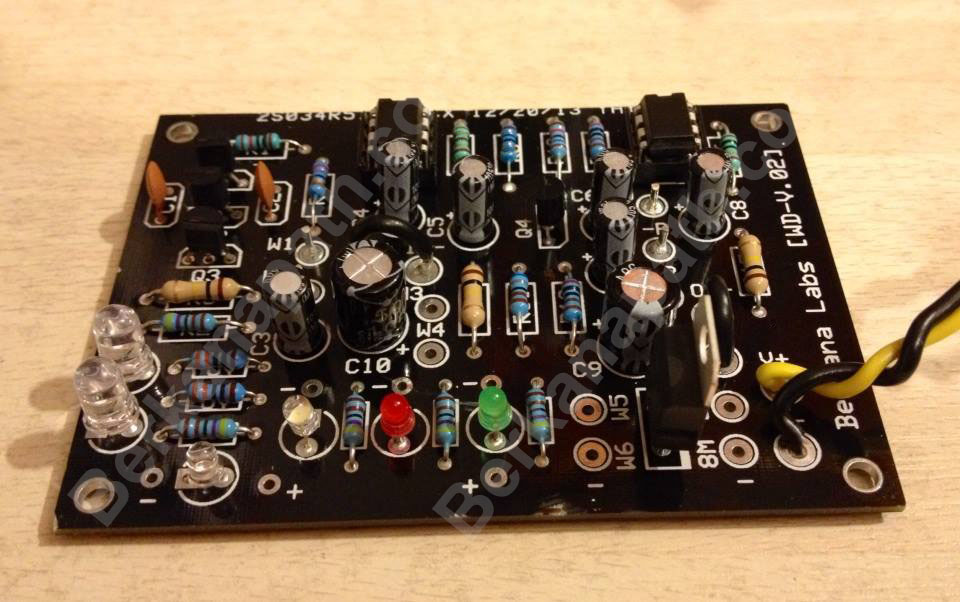 I have added improved potentiometers to the instruments. They now have high tolerance wire wound resistors. The casing of these allows me to easily service them and run them through diagnostics before putting them in each instrument so their performance is improved greatly.

I have had new input plates machined in Britain, these are high grade stainless steel with a brushed finish that looks great on the instrument and improves surface resistance.

Furthermore each instrument now has an engraved Berkana Labs name plate attached to the front. This is a sign of quality, and shows that you will be receiving an original high quality Berkana Labs instrument. Due to the phenomenal power of this instrument I’m sure there will be people knocking out cheap imitations that wont be able scratch the surface of her capabilities, or the quality of construction.

I painstakingly work to detail taking 8+ hours to produce an Instrument from start to finish, and that doesn’t include the spectrum and frequency testing that I also run on each Instrument. These Wickenden Device V.02 Radionic Instruments are working exceptionally well for people all over the world. Once I get a few more reviews, I will list them on the Berkana Labs product page that I am building. In the mean time if you wish to purchase one, please sign up using the form at the end of this post. Below is an image of one of the latest V2’s, yours will look exactly the same.

I have also written a comprehensive operation manual, it’s at first draft at the moment. Once complete they will be sent out to the Instrument owners. 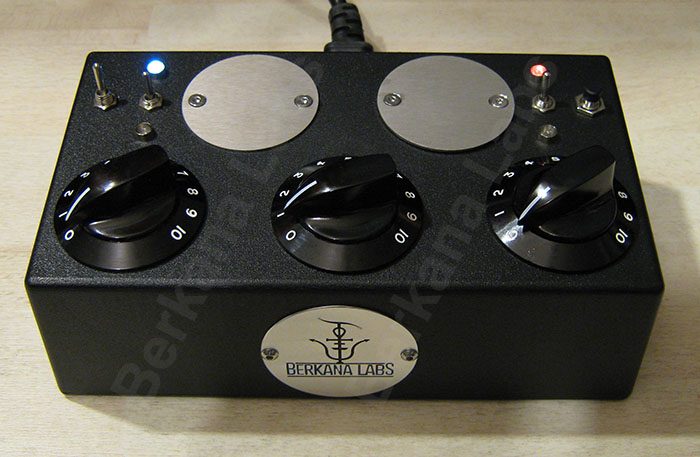