The stick pad is an integral part of any radionics machine, yet many people are confused by this divination method. I have written this short article to give you an insight into the mysteries of the stick pad and how to effectively tune your radionics machines with one, or use one as a simple mean of divination for multiple questions.

A stick pad within a radionics machine is usually a copper plate linked directly to the core of the manifest generator and the rate circuit. On top of this copper plate is usually a thin polymer layer, in some cases glass or even a custom made piece of orgone matrix.

While the stick pad primarily relies on the ideomotor response of the operator I believe there may be a few more subtle energies involved in actually getting the stick. It is my belief through Ministry of defence research that the low frequency natural electric fields, or static as it is commonly known is a manifestation in some degree of the fundamental energy of the universe termed orgone or chi.

When you use a stick pad which has a layer of plastic over the copper plate you are able to create a small amount of static by the rubbing process. It is within some of this static that the orgone energy resides, which can act as a carrier for intention and the radionics signals being output from your machine.

The key to using a stick pad is to let all preconceptions fly out of the window and trust the reactions you are getting form the rubbing plate.

The reaction or “stick” manifests uniquely for each and everyone of us. For some it will appear as if their finger is getting heavier, for others such as myself it will manifest as sticky finger and your finger will be pulled due to friction.

Having just mentioned fingers, it is worth noting that no specific finger or thumb is recommended over the others, just use which ever you feel comfortable with. However, I find being right handed, I prefer to use my left hand to dowse the rates on a stick pad.

It really is worth giving the stick pad a go. If at first you don’t succeed then keep on trying.

Have you ever walked into a place and felt a negative energy or vibe? If you happen to live in this place then it can become a problem.

This kind of negative atmosphere is commonly reported by people who claim that their home is haunted, or if they are experiencing some emotional turmoil. However, how does one begin to rid their home of this negative energy?

This procedure will allow you to gain the rate for the cause of the negative energy and overcome it by setting a balancing or compensatory rate. To do this you will need a radionics machine.

Place a picture or other sample of the source of negative energy on to the witness plate, this could be a picture of your home or someone else’s, you could even dispel negativity within a marriage for instance, by placing a picture of the two partners onto the witness/input plate. Tune into your sample by slowly tuning the witness dials on your machine. Continue to lightly rub the stick pad with one of your fingers as you tune the dial, when you reach the correct setting you will get a stick on the pad, continue this procedure with the rest of the witness dials.

The next step is to determine what the cause of the negative energy actually is. This is done by taking the trend/outcome rate. With your finger lightly rubbing the stick pad begin to tune the trend dials in the same manner as you had done for the witness until you get a stick on the pad. Make a note of the numerical values that your trend dials have set at. Let’s say for example, that my machine gave the following values (3), (3.5), (7), (5), (9.3), and (1.5) this would be the setting for the cause of the negative energy, now what we want to do is balance the cause to clear the negative energy.  This is done by subtracting the value that you have made a note of from the maximum numerical value of your dial. In this example the maximum numerical value on my dials is 10, so using the above example, we would subtract 3 from 10 to get 7,  3.5 from 10 to get 6.5. Continue doing this until you have got your new rates. The full set of new balance rates for the example are (7), (6.5), (3), (5), (0.7), and (8.5). Re-tune your trend dials to the new rates, and you are all done.

Once you have found the balance rate it can be a good idea to add a written command to a piece of paper and place it on your trend plate. This command can take the form of something positive, for example, “this is a happy marriage”, or “this space is positive”. Always phrase your statements as if it has already happened or is continuing in the present.

Leave the rates set on the Radionics machine for at least 24 hours. After 24 hours you should begin to see results in a short amount of time, although it can take longer. 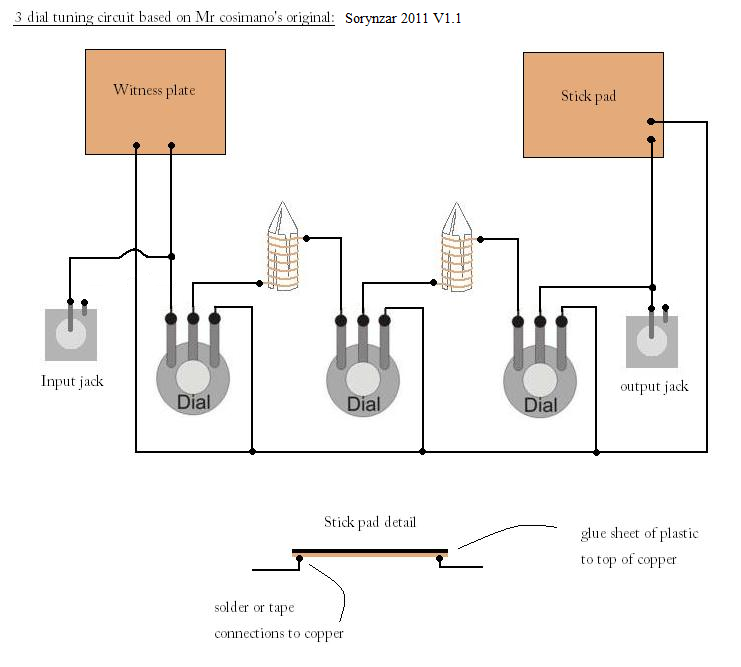 This is a simple radionics schematic, a three dial tuning circuit which you can use today.

The radionics circuit is based on drawings done by Charles Cosimano, aka Uncle Chuckie. It is quite simple to construct. The black lines represent wires, you can use any type of wire you have available. The black dots represent a connection, which ideally should be soldered, but tape could also be used.

You can see the two crystals between the dials, these are wrapped in copper wire and connected to the potentiometers.

The witness plate should ideally be made of copper. The stick pad should also be made from copper with a plastic of your choice covering it. I would go for a plastic which would generate a good static charge, so the type found on coffee cans as mentioned by Uncle Chuckie would be great for this.

The input and output jacks are simple monaural jacks that allow you to add peripheral equipment in the future, being a simple circuit you may want to use it with other devices so the jacks are ideal.

House the radionics circuit inside a box of your choice, I personally prefer to use wood as it can be a good incubator for thought forms and does not prevent orgone from passing freely as some plastics do. You could also use shoe boxes and cigar boxes as Uncle chuckie has mentioned in his books.

If you have any questions on this radionics schematic feel free to comment, and I will do my best to answer.

I have made the jacks more electrically stable for this type of circuit. If an electrically powered device were to be connected in the original design it would short across the closed circuit. As it is, the shorter ground pins are left open to prevent the electrons from flowing around the circuit when a suitable device is hooked up. With just the positive pin from the jack connected to the circuit, any RF frequencies emanating from the additional peripherals will flow freely into the circuit/ After all radionics is primarily concerned with radio frequencies, so this will work well. If any electrical devices needed to be connected, I would advise you to connect the short ground pins to an electrical or Earth ground source.

What exactly is radionics? In this article, we will explore its early beginnings and some of the terms used within the field.

Radionics is a process by which a practitioner can tune into an object, place or living entity and correctly diagnose ailments or create a link with the subject which operates at a quantum level. The practitioner can then apply a desired outcome to the subject by tuning into the outcome and transferring it by the link already created.

Radionics was the brainchild of Dr Albert Abrams in the early part of the 20th Century. He quickly gained credibility with his devices among the medical profession of the day.

However, radionics is not without its controversy Over the years a number of scientists have sought to disprove its effectiveness claiming that there is no known evidence for its effect, and that it cannot be proven in controlled lab conditions. It is for this reason that the American FDA banned the use of radionics in medicine.

Luckily, the use of radionics is thriving in Europe, with alternative therapists and experimental medical professionals taking up the reigns. You may be thinking, “If scientists have disproved it, then it must be a scam?” This is not the case. The experiments carried out were of yesterdays standards and did not take into account recent advances in frontier physics and biology, which has an ample amount of evidence supporting the human mind’s ability to create its own reality. With these recent advances, we can see how the radionics instrument can be used as a tool to facilitate the connection of the human mind with the universe that surrounds it.

There are a number of radionics devices on the market some aimed at just gathering information from a sample or subject, others are tailored to compliment the target by creating a connection with an outcome also known as a trend. While there are many devices they all operate in a similar manner using the vast potential of the human mind. More advanced machines will contain the latest breakthroughs in technology and physics all aimed at improving the connection of the operator with the universal field.

While researching radionics you will come across a number of terms. In the next section, we will look at these various terms.

The witness: The witness is used to refer to a sample of the subject or target. This sample can take the form of a drop of blood, clipping of hair, or even a photograph. It is the witness which allows the practitioner to tune into the target.

The stick pad: Most radionics machines will come with either a stick pad, or a pendulum. The stick pad is a dowsing or divination tool just like the pendulum and is used to get the radionic rates. The operator will rub their finger lightly around the stick pad while tuning the rate dials until they feel a stick. This feeling manifest differently in each individual but will usually feel like your finger cannot move anywhere or as if the stick pad has become tacky.

The rates: In traditional radionics the rates are set by tuning a number of dials. The dials will usually be numbered from one to ten or one to a hundred. It is thought that the rates represent a multitude of alternate realities all vibrating at a separate frequency. When you get a stick on the pad while tuning the dial you have unconsciously tuned into the appropriate frequency or vibratory rate of the witness or trend, the numbers on the dial being a physical representation.

As you may see radionics can be used for a number of positive applications. It is not just limited to health and medicine. With radionics you can manifest anything you set your mind to. From manifesting events to using it for self improvement, the choice is yours.